The Gospel Books below are e-books on Amazon and Barnes and Noble.

We prefer to sell at Barnes and Noble to better support the project.

An illuminated Manuscript of the Gospel According to Saint John by James Pepper, part of the Pepper Gospels. The work is entirely by hand without the use of computers. . This volume, contains dozens of original illustrations, this book is a devotional treasure.

The cover features a flock of Ivory Billed Woodpeckers, the mating pairs are flying in formation to form a cross.  The bird was thought to be extinct, but were found near the Mississippi River and the birds are used here to represent Resurrection.

James Pepper has made, by hand, an illuminated manuscript of the Gospels, a separate and complete New Testament and several books of the Old Testament. Blessed by Pope John Paul II and John Sentamu, the Archbishop of York, this book is a devotional treasure.

“The Gospel According to Saint Luke: from The Pepper Bible, A Modern Illuminated Manuscript“

The E-book, is out now on Amazon, Barnes and Noble.com and also on the iBooks for the iPad.  A handwritten illuminated manuscript with 25 full page illuminations and 440 illustrated verse initials made like they were written a thousand years ago.

You can give this to another person, Amazon has a feature where you can give eBooks to other people.

And we have Christmas Cards at this address: https://pepperbible.com/purchase/ 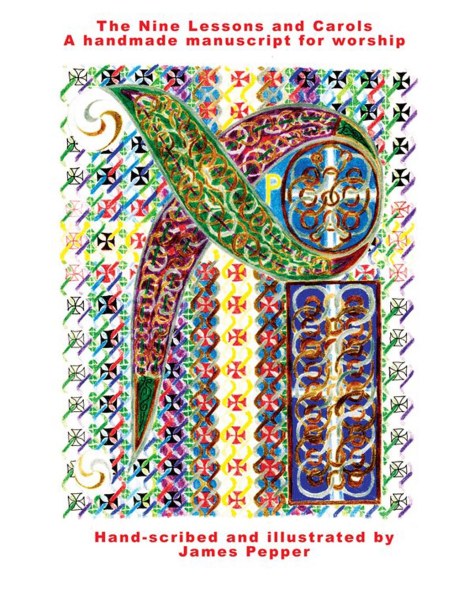 An illuminated e-book. The Christmas Service sung by the boys choir at Kings College Cambridge every year and aired on the BBC handwritten and illustrated including 14 Christmas Carols so when you go caroling you can have them right there on your device and read the lyrics directly. Carols include Silent Night, Hark the Herald Angels Sing, On Christmas Night, and Joy to the World!

7 thoughts on “Books on Amazon and Barnes and Noble”

The Pepper Bible, a handwritten illuminated manuscript of the Bible

A link to the website to purchase frameable prints, notecards and more!